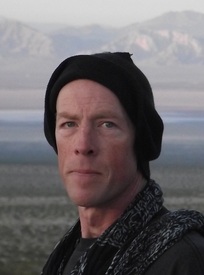 
I am a self-taught artist. I  made my artistic debut as a caricature artist at Ameriflora 92, an international floral show held in Columbus, Ohio.  I had my first public show of paintings in the summer of that same year. In January of 1993 I joined Acme Art Co., a non-profit alternative art space in Columbus' Short North arts district. I worked as a regular volunteer for seven years, serving on the board of trustees for three years, including one year as president. My artwork has shown in numerous central Ohio galleries and museums, and is included in the Ohio Arts Council permanent collection, as well as private and corporate collections in the U.S., Canada and Europe. Before moving to California in 2006 I spent three years as Artistic Director, Designer and Production Manager of the "Signature Series" line of hand-painted ceramic bath ware for Mansfield Plumbing Products.
Since moving to Twentynine Palms , my work has appeared in various group and solo shows.  In 2008 I was commissioned to paint six 4 ft x 8 ft murals for the Holiday Inn Express in Twentynine Palms.   After receiving private commissions to paint murals on local water tanks, in 2012 I was commissioned by The Glass Outhouse Art Gallery to paint their 12 foot tall, 5000 gallon water tank to look like a vintage Pepsi can.
​ My work is as about as regional as it gets. Localism taken to the point where I don’t even leave my yard to look for subject matter. Not that I planned it that way , it’s just a function of living in a wilderness area with unobstructed views of the surrounding mountains and clear skies most nights.  Wonder Valley is in the eastern part of the Morongo Basin , which runs along the north border of Joshua Tree National Park. Starting at the east slope of Mt San Gorgonio, the basin stretches about 40 miles east to the Cockscomb Mountains. It’s the only mountain basin on the continental U.S. that runs east-west. The site of an ancient sea bed, and skirting the edge of the San Andrea’s Fault , the area has always been considered a locus of natural energy. All the raw forces of nature are at work on a grand scale. Standing in my yard I have a clear view from one end of the basin to the other. All of these paintings are inspired by what I see every night when I take the dog out for his walk.

My wife, dog & I live in a wilderness community in the middle of the desert.  It’s a 20 minute drive to get milk, we love it.